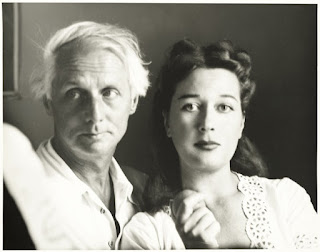 Plank / Variation on a theme 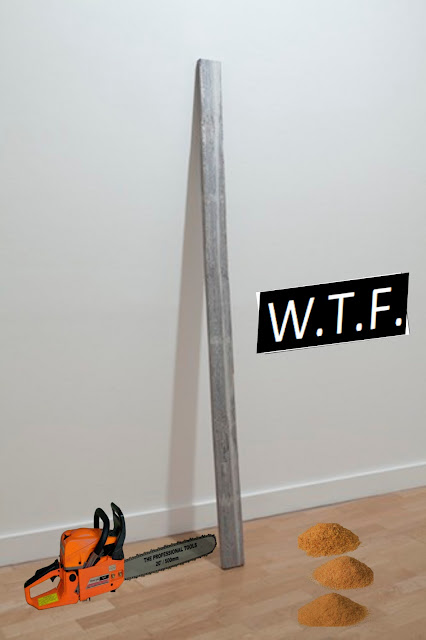 Came across this picture from a current exhibition in London. It shows a plank happily leaning against the wall (you guessed it, it's the very same plank and the very same wall you see above).

Thought this installation could use a little more complexity and added the piles of sawdust, the chainsaw (always comes in handy when you've got to work with planks) and the letters W.T.F., which of course stand for you know what.
Posted by Iself at 8.3.13 No comments: Links to this post

For L.
"There are three fields I work in,"
she said, "performance, video
and drawing." (Her father prompted
with proper suggestions to go on.)

"The performances are exhausting;
they all have to do with ropes,
climbing and descent. I'm not sure
whether they are Apollinian or

Dionysian, something else I have
been interested in. In one, I cut
a bowling alley in half, making holes
in the walls left and right at about

half height to hold the rings
for my rope. I went along towards
my audience, it was both strenuous
and exhilarating. Sometimes

I caught myself wanting to laugh:
what were all these people doing,
watching me with serious eyes
as I went along." Her father prompted,

"And one of your videos was..."
"... dancing along an ugly street
in funny yellow pants. I did many
iterations of this, varying my steps,

arm movements and behavior.
A friend of mine did the filming.
Mostly the people seemed per-
plexed, not knowing what to think

of this crazy person doing this,
making way, moving aside. Not
stopping." "Is there any money
in this?" somebody asked.

"In the videos? – I suppose
they could be sold. Or the drawings
I do – that's my third field
of activity." "And how do you

do them?" her father prompted.
"I make myself rules, I restrict
myself. One drawing might be
only boxes, for example, in only

five colors, but with other rules,
to increase complexity." "And
these you would sell, there is
a market for that?" her father said.

"There is a market, and, once
it has found you, it wants you
to repeat yourself. I could become
the colored box lady,

or the rope performer, or
the hip-hop dancer of dreary
streets, both Apollinian and
Dionysian." Thus ended Lou,

to soon perform an acte
morpheusien for a change.

A freewheeling act for NaPoWriMo #3, concocted fresh from the lips of Lou herself last night.
Posted by Iself at 3.4.11 7 comments: Links to this post 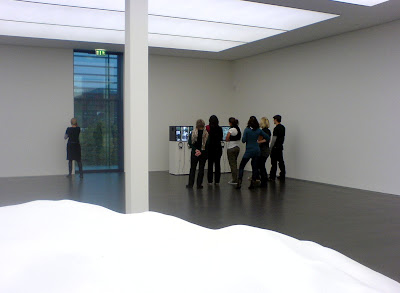 Salz oder Persil? Eines der Exponate der Ausstellung Eat Art im Stuttgarter Kunstmuseum.
Meine Fototour
Salt or laundry detergent? One of the exhibits to be seen at the Eat Art show in Suttgart.
My guided tour with photos
Posted by Iself at 1.11.10 No comments: Links to this post

In October 2009, GeoCities – free host to zillions of web pages – shut down.

Today I discovered that David Feinman ported many, many of those pages to ReoCities, including link fixes, so that cross-links to former GeoCities pages actually work.


A great big cheer to David!
My old site SoHo/bistro/7067 is among the sites that were saved.

However, I'd also prepared for the death of GeoCities by moving the pages to my own domain. And that is, of course, where the pages will be updated and where more will be added.

Click here to go to the new home of SoHo/bistro/7067 – International Forum for Literature and Art
Posted by Iself at 9.2.10 No comments: Links to this post Marketing will focus on the three pillars of strength of the brand philosophy:
Discovered and posted for Photo Hunt 110 / Candy.
Posted by Iself at 18.5.08 3 comments: Links to this post A digitally modified photo for "color" at Two for Tuesdays.
Posted by Iself at 15.5.08 No comments: Links to this post I liked the ornamental quality of this entrance in Stuttgart-Ost.
Posted for "Doors" at Inspire Me Thursday.
Posted by Iself at 9.5.08 2 comments: Links to this post Is it an illusion, or is there something in there ... an animal, a tree?
Posted in response to Inspire Me Thursday's request – "Think magic… optical illusions… mimes… or any other visual trickery that inspires you."
Posted by Iself at 17.2.08 6 comments: Links to this post Gefördert vom Kulturamt der Stadt Stuttgart
Posted by Iself at 21.9.07 No comments: Links to this post Posted by Iself at 9.8.07 No comments: Links to this post One result from Linguasso - dynamic emotional design
"linguasso (for lingual and Picasso) creates totally random works of art, composed of text and based on varying emotions. It chooses an emotion, then displays associated words and dynamically created sentences in random fonts, sizes and places. It's quite addictive to watch over and over again, as each design seems to tell its own story."
Posted by Iself at 9.4.07 No comments: Links to this post ALL AGONY IS CEREBRAL.

Ora Odoura is photographer and specialises in outdoor and creative photography. Her storytelling shoe fiction was selected for Argo Spier’s 'Heaps of Cream' sequence because of both the contrast and complement it forms to the sequence . Her's is a story of peaceful meditation. 'Heaps of Cream' is cerebral agony.

Some rudimentary muzangs on poetry, art and music.

Correct me if I'm wrong (in other words, comments invited). I've noticed that poetry magazines and e-zines that include art seem to prefer realistic or semi-realistic over abstract art. This seems to go hand in hand with the kind of poetry they tend to publish, which could also be termed to be more or less realistic. The kind that appears to be proud to be the opposite of Robert Bly's "leaping poetry" idea. At worst, I'd call it "clod-stuck poetry."

It is exemplified very well by the stuff Ted Kooser, ex-U.S. Poet Laureate, digs up for his weekly e-mails.

You can subscribe to it under http://www.americanlifeinpoetry.org/
Posted by Iself at 16.12.06 No comments: Links to this post