A couch in New York 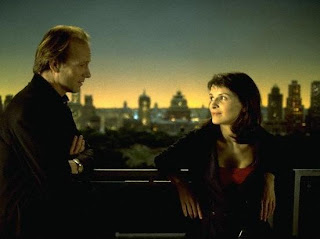 Ever feel like watching a lackluster romantic comedy? Well, you never know, once in a while you might. For example, to watch some stars you liked in other films.

This was the reason I recently checked out Un divan à New York (1996, German title Eine Couch in New York, i.e. A Couch in New York) with Juliette Binoche – co-star of Johnny Depp in Chocolat (2000) – and William Hurt, who had impressed me in The Accidental Tourist (1988).

Hurt plays a New York shrink on the brink of a nervous breakdown who decides he needs a change of scenery and trades homes with Binoche, who is an I already forgot what in Paris. Binoche's chaotic place in France's capital is too much of a change of scenery for Hurt (who gets attacked by pigeons, broken pipes and a jealous ex-lover of Binoche's), so he returns home after a few days, only to find that Binoche has taken over treatment of his patients, committing numerous psychology no-nos in her consultations. Strangely though, these broken rules render happy patients, something the good doctor has failed to achieve in all his years as a famous psychotherapist. He becomes a patient on his own couch...

That's how this love story with a complete lack of chemistry begins. But no, wait – it's already begun in Hurt's head while reading Binoche's intimate diary at her place (it looked rather like one of the paperback poetry books from Gallimard). If that ain't another no-no.

How about the acting qualities displayed here? Well, Hurt walks around with a permanently insulted look on his face – could also be a liver problem or constipation –, while Binoche comes off as a likeable airhead. I supppose that's meant to be French esprit.

So, if you're in the right mood for tepid romance and stuff borrowed from perhaps a dozen other movies (American and French), go ahead and watch this one.
Posted by Iself at 29.12.10 No comments: