It’s a crowded place and lots of stuff’s been happening
– Badger T. Bones

Today's task would have been “to write a poem based on a headline – it doesn’t have to be big news – it can be any news at all, from the girl in your town who won a contest for growing a potato that looks like Queen Victoria to the tabloid offering definitive proof that aliens are designing celebrity Oscar gowns.”

Didn't go for the cutesy news stuff so much as for more or less normal random picks from the news chaos in this universe.
Posted by Iself at 30.4.11 5 comments:

Translated from the Hittite

Reconstituted and translated from an anonymous Hittite fragment and rendered by L. Blumfeld in condensed form in modern English.

Posted for NaPoWriMo day 29. Today’s task would have been “an act of homophonic translation. In other words, ‘translate’ a poem from a language you don’t know into English, based on how the words look or sound.” This post is different, of course, in that it is not a homophonic but a more or less accurate (i.e. semantically based) translation. However, Hittite is definitely a language I don’t know.

Why can’t I think of
any? It’s not that
they’re all the same
to me. But ever
since yesterday, when
I started thinking
the matter over,
I haven’t come up
with a single one.
Ok, so I don’t tend
to use four-letter
words that often
in poetic mode. (Real
life is different. I do
resort to expletives
regularly where
warranted. And those
warranted situations,
as you know, occur
all too often in
real life.) But now
I’m down here
in what has become
a much longer
poem than I’d
intended, and still
have not thought
of a single word
I hate. Let’s say
I’m like the
benevolent creator –
they’re all my
children – I must
love them all
democratically,
whether they be
English, German,
Turkish, Malayalam,
Chinese or Urdu.

Written for NaPoWriMo day 28. The task, you guessed it, was “to try writing poems using our least favorite words.”
Posted by Iself at 28.4.11 4 comments:

(Rearranged and beautified by Iself from original spam)

Posted for day 27 of NaPoWriMo. U quessed it – thje tusk was to yuse spwam & turnh hit inta pwoeteri.

I’m bulky
and white
and up in a tree

I’m half-open,
but should
normally
be closed

I’m not as cool
as I used to be

I normally
need juice
to keep my
motor running,
but up here
there’s none

I’ve been
reduced
to failure

Written for NaPoWriMo day 26. The task was to do a “riddle poem – one in which you write from the point of view of an object or person (or about an object and person), and the poem itself forms a giant riddle.” Well, giant it’s not exactly, but a riddle it is. Let’s see if anyone can guess what I’m impersonating here.

As the end of NaPoWriMo is drawing nearer, I’m getting close to feeling poetically exhausted. It’s not that easy to produce poetry on demand. And the demands (the prompts) are often different from what I would normally write on my own. For example, I would not normally write riddles. I might write cryptic or eclectic or enigmatic stuff, but not riddles. Oh well, it’s really my very own decision to take on a prompt or do something else. And some of the prompts have been a lot of fun, and it’s actually been good to venture out and do something I would normally not do.

One thing’s for sure, though: April is definitely not the cruellest month (happy to contradict you, T.S., as always). In fact, it’s one of the cooellest months. Period and amen.
Posted by Iself at 26.4.11 9 comments:

As usual, I enter the apartment at night. Everything is sepia, as in old sepia photographs, with that old-fashioned, dusty feel. Things are dusty and old-fashioned in the apartment, from the whiskey glass with the dry residue at the bottom to the face-down paperback mystery next to it, the floor lamp with its thin bronze stalk and faded cylindrical shade, the small framed photos on the wall. Who is that? Looks a bit like Hedy Lamarr. And the man with her, smirk on face, hat at rakish angle and cigarette elegantly held in gloved hand? Is that me in a different incarnation?

I find that there’s nothing to do here, nothing that can be done in the short time I have for this apartment. Cleaning it up would take days, so let’s not even get started. I could go on reading the mystery. It’s The Root of his Evil by James M. Cain, and I’m on page sixty apparently. Or is it open to that page only because the spine is broken there? I have no recollection of what the book is about, none whatsoever.

Now’s the time something would happen in a book by Cain or Chandler or Hammett. A car would drive up outside, the phone would ring, or I would discover a set of toes underneath a floor-length curtain, something blunt would hit the back of my head and I’d pass out.

Written for NaPoWriMo day 25. The task was to “write an autobiographical poem.” I would call the above an autobiographical prose poem. Autobiographical because it is about a recurrent dream I used to have. A poem because it's more poetic than prose usually is.
I haven't returned to that apartment in a long time. I’ve turned it into reality – I’ve rented a space in a place downtown, nominally to work there, but I’m hardly ever there. 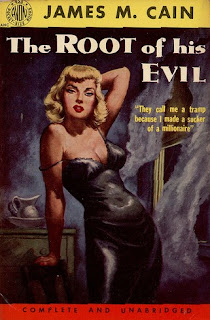 No poem today
on Easter.

At least not so far.
I'm staying with my seester.

Posted for NaPoWriMo day 24. The task would have been to "write a bouts-rimes. The bouts-rimes is a sort of poetic parlor game: you write a poem using the rhyming end words from another poem. They’re usually done with sonnets in English. So today I challenge you to write a bouts-rimes sonnet, using the end words from either K. Silem Mohammad’s poem You White White Teatime Teen, which was itself constructed anagrammatically from Shakespeare’s Sonnet VI, or from Robert Frost’s The Silken Tent. So your end words are either:
rage, doom, age, tomb, sighs, breast, thighs, west, mad, blues, plaid, shoes, fail, mail
or
tent, breeze, relent, ease, pole, heavenward, soul, cord, bound, thought, round, taught, air, aware."
This did not inspire me at all. I read both poems quickly, but neither did anything for me.
As the above silly ditty says, I was at my sister's place in the country for Easter, and I only had time to go online briefly in the morning.

PS: The following transpired after all...

Sonnet written in an hour of poetic darkness

As after midnight I rage,
I feel only doom,
and my age
appears close to the tomb.

Thick sighs
alight from my breast,
not thighs,
you idiot off there in the west.

Call me mad,
give me the blues,
wear preppy plaid,
step on my shoes –

whatever you do, you'll definitely fail
to get any more of my mail.
Posted by Iself at 24.4.11 2 comments: