The salsa enters on the tiptoes of celery
its bongos are maroon leathery mushrooms
And the fat singer after margaritas
is pulsating fire: Celia Cruz

One quarter elemental for napowrimo #17, something elemental.

Note
Some explanation might be in order here to make this less cryptic.

This poem came about some time after the purchase of El Baquiné de Angelitos Negros, a 1977 album by Willie Colón. The cover shows dancer Brunilda Ruiz, and I somehow wove her, salsa and the much older song by Eloy Blanco and Álvarez Maciste into this poem along with salsa queen Celia Cruz, transplanting the whole show to Paris and quoting a non-existent Frenchman to introduce it. 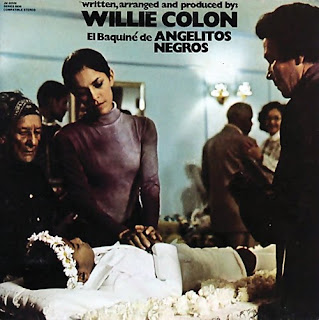